This entire year has been a life changing experience for me. Especially in terms of hiking and backpacking. My favorite trip thus far was my first multi-night backpacking trip through the Shining Rock Wilderness. Up until that point I had only backpacked a few times, the hikes in and out were short and relatively easy, and most of the time I found that people refused to let me carry my fair share of the weight purely because I was a girl. I’m not going to lie, I’m tired of hearing that. This year I found my voice and proved my abilities, on more than one occasion. I’m now better at starting a fire than most people I know, I know more first aid than the majority of my friends, I can hike faster, carry more weight, and ultimately hold my own. I don’t say any of this to brag, I say it to prove a point. I’m constantly being doubted. I’m trying to plan my first solo overnight backpacking trip and everyone has expressed concerns and the wish that I would bring someone with me. I have my dog, that’s all I need.

Anyways, my first multi-night backpacking experience was amazing. We went through Shining Rock Wilderness over Memorial Weekend in May. It was closed for most of the summer shortly after our trip due to bear activity.

The area was crowded, the parking lot was brimming with cars. Immediately my heart sunk, I go backpacking to experience solitude not be surrounded by people. But we stuck to the less traveled trails and managed to avoid contact with other hikers until we set up camp. We parked at the Black Balsam Knob parking lot and instead of taking the Art Loeb Trail we took another trail that connected us to the Ivestor Gap Trail which eventually leads you to Shining Rock Gap, which is a popular camping spot and where we set up for the night. It was crowded but we were able to find a little alcove among the trees further away from the surrounding parties.

The next morning is where our mistake was made. The trails are not well-marked and we missed the connection to the Art Loeb Trail that was supposed to lead us to Cold Mountain. Instead we took another trail over the top of Shining Rock and towards Waynesville, we made it around two miles before we ran into some rangers who made us aware of our mistake. Whats a backpacking trip without a little detour? The sites were gorgeous and worth the mistake. We made it back to where we’d set up camp and managed to find another couple who had made the same the mistake the day before and were kind enough to send us off in the right direction. This part of the trail takes you over the aptly named Stairs Mountain, this part was by far the hardest part of the whole trip for me. With a long detour, a restless sleep due to bears in our camp, a steady ongoing rain, and a dog who was struggling, I was exhausted. My legs were burning. But I was determined to keep up. I was not going to allow myself to show any weakness. I could do this. And I did.

We made it to the top of Cold Mountain with just enough time to set up camp and witness the sunset. I still dream of these views. We had originally planned to hike back to Shining Rock Gap but due to the detour and the slowed pace due to the rain we didn’t have time to make it back down the mountain. I’m glad that we stayed. That night we had the mountain to ourselves, I have never felt more at peace. My sweet, albeit neurotic dog, was not as happy. I’m not sure what was outside our camp that night, but Harley was not happy about it.

Morning meant the start of our third day and the end of our trip. We took the Art Loeb Trail the whole way back to witness different views. And it was stunning. The trail took us to the top of Tennent Mountain and Black Balsam Knob. I am so glad we decided to save these for the end of the hike rather than the beginning because it gave us something to look forward to at the end of the hike. At this point though I had rather large blisters on my feet and my pack was rubbing my skin raw. One of the joys of new gear not yet worn in. I have since learned how to avoid blisters. We had a much longer hike back than we’d originally planned, but the views made it all worth it. I spent the last two miles carrying my dog, luckily he only weighs 35 lbs, but that weight adds up. The terrain was rough on his sensitive feet and his pads were torn and bleeding. We were a poor sight to see at this point. Limping pathetically due to the damage to our feet.

What I remember most from the trip was walking through trails that were lined with blueberry bushes just beginning to ripen. And the rhododendron arches that felt magical as I walked under them. And the glistening of the quartz from Shining Rock. I remember the breathtaking views that surrounded me from every direction. And I remember the soft sunset creating a warm glow as it peaked the through the trees on its slow descent behind the mountain. And the feeling I got when I realized that I had entire mountain to myself. That was pure peace and solitude. But best of all was the feeling I got when I completed the trail. A boost of confidence. I did it. This trip only solidified my love for backpacking and the need to be outdoors as much as possible. 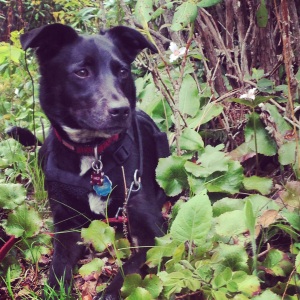 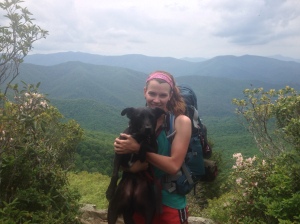 Views Peaking Through The Trees 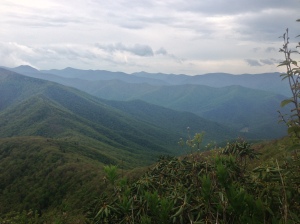 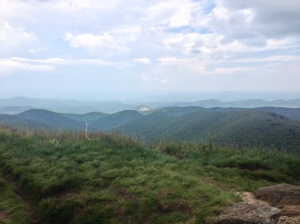 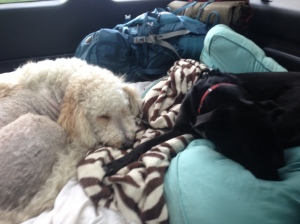 Check out this great guide to hiking this trail

Follow The Misadventures of Anna & Bear Bait on WordPress.com
Join 981 other followers